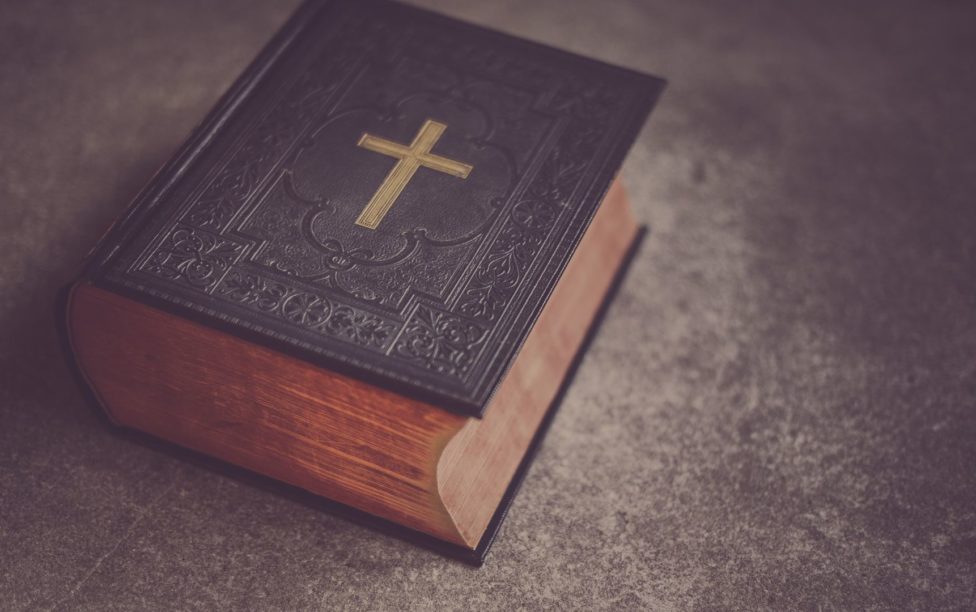 There is little doubt that the Bible -the Old and New Testaments- has contributed to the fabrication of a moral regime in the culture of what we call the West. Or to put it another way: it is largely thanks to the Bible that, in this part of the world, we are civilized human beings and not savages. However, this being so, what Western writer today openly admits to being under the dominion and influence of such a reputed (and for some, sacred) book? It is not necessary, as is also the case with other myths (Quixote is a literary example) to have read it in its entirety, a task that only a few persevering, enthusiastic and fortunate people have completed. The Bible is read by environmental aerosols, or by osmosis, as it is said that Rubén Darío and Menéndez Pelayo read books. We have read the Bible (and Don Quixote, and so many others) without even opening those voluminous texts; books that, it could be said, they have read to us.

The Bible is many different things, and if there are those who are convinced that it is a sacred book written under divine influence, what is clear for religious, believers, agnostics and atheists is that it is a literary book, a monumental treatise on literature where all possible genres and styles fit: mythology, prophecies, sermons, wonderful facts, sagas, biographies, novels, poems, legends, love songs, etcetera. Also, of course, the Bible (or rather, the books that make up the Bible) contains a whole range of literary techniques that would suffice to give a fertile course in comparative literature in any Spanish workshop or American university, where allegory, symbol, comparisons, discourse, monologue, symmetry, ritual and narration in circles, genealogy and dialogue stand out, with the Book being especially rich in this last technique. It is the Bible, therefore, a narrative text, where what matters is the argument, the plot, the plot, leaving in the background the print, the description, the rhetorical ornaments and the search for formal beauty. The Bible, epitome of fantastic literature, as Borges, an enthusiast of the genre, used to say, goes to the point, to the action.

The Bible and the writers 1

As I was saying, all this, what does it matter to a writer and a reader today? I’m not going to pick apart the Bible to prove them wrong, what nonsense, nor to prove that Bible translations have been crucial in creating language and nation (England, Germany). I do intend, on the contrary, to outline a series of well-known examples for the reader to see – if he has not already noticed – that the Bible (as a standard or not of the Jewish, Christian or Islamic religion) has been present until very recently in the work of the great Western writers, and that although it has been losing (apparent) importance as societies have become more secularized, there must be some who are still fascinated by the Book and spurred to write.

It is perhaps the Old Testament, because of its remoteness and profusion in everything that most concerns the conflict of the human heart, the richest in literary terms, although it is the younger brother, the New Testament, which has enjoyed more luck on the moral and religious plane. Writers, therefore, will be more partial to the so-called Hebrew Bible, which, according to historians, was almost entirely written during the reign of Josiah of Judah (639-608 BC), although oral transmission (the origin of the literature) may have begun in the 13th century BC.

The first writer clearly influenced by the Bible is Augustine of Hippo, whose books (The City of God, Confessions) became popular during the 4th century, becoming authentic spiritual best sellers in early Christianity. In the Middle Ages, it was the Mester de Clerecía, with Gonzalo de Berceo at its head, who, with a cultured and erudite language – practiced by Jews, Moors and Christians alike – recognized the devotion to biblical readings, and as a result, works such as that of the aforementioned author were born, where the Milagros de Nuestra Señora (Miracles of Our Lady) stands out. Somewhat later, perhaps it was Dante who, with his Divine Comedy, gave more importance to the biblical fact, in a well-known -and little read- text in which his beloved Beatrice and the pagan and admired Virgil walk with the author through a hell turned into a sort of tornado of concentric circles according to the gravity of the sins committed in life.

The influence in Spain is also very clear, since from the reaction against the Lutheran Reformation, religious mysticism sprouts in poetry, with a Renaissance that also gains strength in terms of great literature: San Juan de la Cruz, Teresa de Avila, Juan de Yepes. In the cultivation of prose, during this fertile 16th century, the two Fray Luis stand out: the Augustinian Fray Luis of León and the Dominican Fray Luis of Granada, as well as the Hieronymite Father José de Sigüenza, a triad that could be said to have invented the grand style or noble style in Castilian: it was necessary to be at the height of what was narrated, and in their case it was the word of God. De los nombres de Cristo (Fray Luis de León), Guía de pecadores (Fray Luis de Granada) and Commentaria (Fray José de Sigüenza) are masterpieces of a grand style that would soon fall into disuse, in the tavern, as Juan Benet aptly put it. What can we say of Cervantes, beneficiary of an era -that of Philip II- in which Benito Arias Montano laid the foundations of Christian humanism with his Biblia regia; or of a Baroque full of autos sacramentales and of a Calderón who made the theatrical genre popular.

Outside our borders, Milton and his Paradise Lost will stand out, and we will have to wait to cross the desacralized century of the Enlightenment to reach Goethe and his Faust (where the ignorance of the protagonist leads him to sell his soul to the devil Mephistopheles) and find again echoes of the Bible. Tolstoy, in a 19th century of literary excellence like few others, will do his best to get rid of his omnipotent and heterodox Christian morality, and Dostoevsky will show his obsession with guilt, sin and hell. Melville, a Puritan Yankee, imbued all his work with a symbolism full of uncertainty and ambiguity, which he surely learned in the Bible. Many others will not be able to conceal the influence of the book – hence the wonderful The Master and Margarita, published by Mikhail Bulgakov in the 1960s and recently published by Navona, a masterpiece on the adventures of the Devil in Moscow -, but above all it marked – together with some avant-garde poets – the two titans of the 20th century, William Faulkner and Thomas Mann.

Faulkner himself said that, every morning, to get himself in tune before writing, he would read some passages from the Old Testament. From this obsession with the abysses of the human soul – not exempt from violence and barbarism – would spring titles such as Absalom, Absalom! (1936), Si yo de ti me olvidara, Jerusalén (1939) -which the publisher eventually transformed into Las palmeras salvajes- and Desciende, Moisés (1942). Around this time Thomas Mann wrote the tetralogy Joseph and His Brothers (1933-1943), enthusiastic as he was about a biblical story as short as it was crucial, which he filled with details and additions. All in all, it was a monumental work that did not find favor with the public and hardly with the critics -a world increasingly distant from biblical references-, and which, as Javier Marías says, in Spain was only read by the aforementioned Juan Benet.

The Bible and the writers 2

And it is precisely with Juan Benet that we come to the penultimate of those who, if I am not mistaken, used the Bible as a source of inspiration and as a metaphorical language. His great novel -the least read and least complex-, Saul before Samuel (1980), takes the myth of the prophet Samuel -the meditative man- and the first king of Israel, Saul -the man of action- to the civil war in the region, in another fratricidal struggle between blood brothers. Nowadays, among internationally recognized authors, only Lobo Antunes -Conocimiento del infierno (1981), Ayer no te vi en Babilonia (2006)- seems to play with biblical similes. Also, in Spain, my dear pharmacist colleague the poet León Felipe did it, and with even greater profusion Jiménez Lozano (Un cristiano en rebeldía, El viaje de Jonás). Nowadays, Javier Gomá (Necessary but Impossible) and the Chestertonian García-Máiquez do it.

It is possible that I have forgotten important names, but there is no doubt that today’s writers have stopped reading the Bible as the inexhaustible literary source of knowledge of the human soul that it is. One is not the same after reading, for example, the so-called Biblia del Oso (Basel, 1569), one of the first translations into Spanish of the Book, made by the reformed Hieronymite monk Casiodoro de Reina, and which is being republished in 2021; a Bible in the grand style or elevated style that I mentioned above, and which reminds us that the Bible was also, at one time, a refuge for heterodox in half of Europe. There is no book more complete, complex, rich and exciting, and it is not in vain that the great writers of history who decided to write under its influence are still in places of honor in the canon, giving rise to the old literary theory: if the chosen theme is great – and there is nothing greater than the Book that forged our Western culture – the style is also elevated, and that is the only way to attain (in this world) eternal life.